<This article is from Issue 67 of “On The Move,” a publication of “new learning possibilities for churches”, at one time published by The Joint Board of Christian Education of Australia and New Zealand.
Although some ideas and liturgies may appear somewhat “dated” in style, concept, imagery or language, they may nevertheless offer a spring-board for new ideas among people who find themselves leading worship, perhaps in a new context, and with some trepidation.
Reproduced with permission. May be reprinted for use in local congregations only. 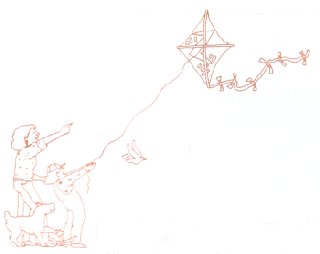 KITES FOR PENTECOST
by Marcus Benjamin

It certainly had taken a lot of activity to get the service off the ground. For the two Sundays before, fifteen adults and some fifty children had spent several hours making kites. The kites, which were of thick white paper, had painted on them the symbols of Pentecost- the dove, the wind and the flames of fire. These indeed made the kites very colourful. The pre-schoolers’ kites were made from cardboard with colourful plastic tails. Imagine everyone’s surprise when they found after the service that all the kites in fact flew very well!Why kites?

We felt that, apart from the visual symbols of Pentecost which were painted on them, the kites also gave us an excellent theme. Gwen Benjamin drew from the children the thought that a kite was earthbound until it was lifted by the wind. We realised that kites can’t fly unless they are let free to roam in the sky We learned also that kites have no direction and no power except that of the wind. Another interesting feature of our kites was that the wooden base which forms the frame was in the form of a cross. Here then was ample symbolism for a memorable service.

One original contribution that we added to the service was the creation of the first of a series of banners which we are going to make and house in the sanctuary of our church. Our very talented artist Nell Lang had the inspiration here. Red is the colour for Pentecost, and on a large red banner there were yellow and darker red tongues of fire and a glorious white dove. The banner led the procession into the chruch and will remain within our sanctuary to have other banners for other special days added to it. The third and fourth form girls created the colourful banner.

A service that included everyone
The service was to be in the church and we wanted everyone to be included. As it was a family service we wanted the children to have a special part. And so we combined all the elements into a liturgical procession. The gowned choir sat in the back rows of the church so that they could participate in the procession, while the children gathered in the foyer – some fifty of them – all carrvin g the kites they had made.

When all were assembled the service commenced with a period of silence which was broken by an organ fanfare and then a voice telling of the events of that first day of Pentecost as recorded in the book of Acts.

A litany “for those who would fly kites” was our own creation which anchored the symbolism of what we had been doing into a meaningful worship experience. After this the children moved back amongst the congregation, greeting and being greeted as they showed everyone their kites.

It was a grand service. Many people took part. The children were very much involved.

Afterwards
The service concluded with a procession out from the church. As the children passed through the front door they were each given a small bag containing string and a tail for their kite. By the time the congregation spilled out of the church there were children and kites all around the lawns and paths of the church.

For many, the highlight of the day came later in the fellowship of a barbecue lunch at lovely Queens Park where a number of families met to fly their kites. Here in this recreation area of the city people saw the symbols of Pentecost soaring skyward as the church gave its witness to the community of the coming of the Spirit.

A litany for those who would fly kites
Leader: Those who fly kites know that kites are earthbound and cannot lift and soar until they are caught by the wind.
People: People and churches are earthbound
and cannot be themselves until the wind of God’s Spirit lifts them to fly.
Leader: Kites are not free to thrust and move
until they are let go to explore the skies.
People: People and churches are not free to love and care
until they can let go and catch the Spirit which is love.
Leader: Kites have no power and direction
unless they are caught and controlled by the wind.
People: People and churches have no power and direction
unless they allow the Spirit of God to move within them.
Leader: Let us pray…
Together: O God, may your Spirit lift us from being earthbound
and free us to soar, to explore, to have direction and purpose.
O God, help us to fly as people freed by your Spirit, to live and to love.

for Worship in Pandemic Times

Contact and a note about using the material on these pages.